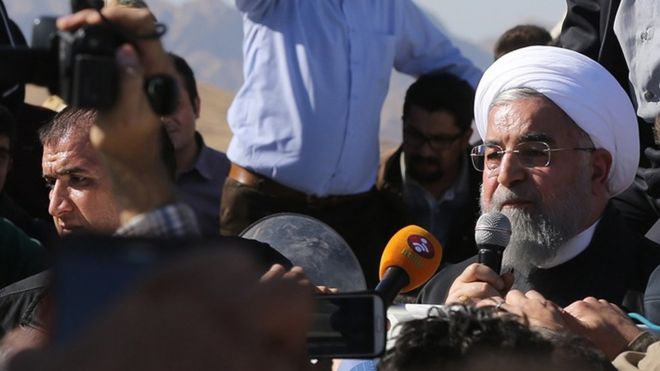 2017/11/14 | 20:37
(Iraq Now News)- Iran‘s President Hassan Rouhani has vowed to "find the culprits" responsible for buildings collapsing in a 7.3-magnitude earthquake on Sunday.

He suggested that government-built buildings had collapsed while privately-built ones remained standing.

As he spoke in the worst-affected city, Sarpol-e Zahab, he gestured to two buildings, one of which had collapsed while the other had not.

Although an earlier report from the state news agency Irna said 530 people had died, the death toll was later revised downward, to 432.

The government is scrambling to get aid to Kermanshah province in the west of the country, where hundreds of homes were destroyed and people have spent two nights outdoors in the cold. 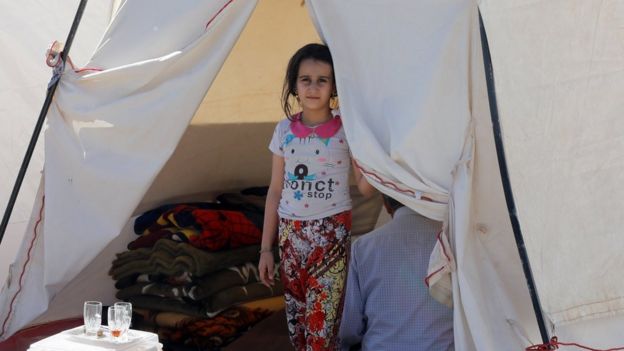 President Rouhani visited the region on Tuesday - a national day of mourning - and made an address that was broadcast live on TV.

He said the government would lend and give money to those left homeless, and hold accountable anyone found not to have upheld building standards.

A photograph circulating on social media shows an unaffected private building next to a collapsed building that was part of the Mehr project, a scheme created by previous President Mahmoud Ahmadinejad to build two million housing units for people on low incomes.

Mehr is Farsi for kindness, and under the scheme hundreds of homes were built in Sarpol-e Zahab.

Pay attention, please, that some of these houses are very new, some of them have been built by the government and they are not very old," Mr Rouhani said.

"However, you can see that some buildings collapsed.How could that happen?"

Forty-eight hours after the earthquake, thousands of people complain that still they have no tents, food or water.They complain about the lack of co-ordination between security forces and aid agencies.Although many soldiers showed up, they didn‘t have enough ambulances or proper machinery to move rubble.

More than 1,900 Kurdish mountain villages have been affected.The villagers say no one from the government has come to their rescue but ordinary Iranians from neighbouring cities and provinces have started sending aid.

Most of the government-sponsored affordable housing complexes for the poor were damaged severely, and many died inside.Even the newly-built hospital in Sarpol-e-Zahab was completely destroyed.

President Rouhani brought attention to this, saying those responsible for the projects - initiated under his predecessor‘s presidency - must be held accountable.But his opponents claim Mr Rouhani‘s aim is to divert attention from his own government‘s slow response to the victims.

Tremors were felt as far away as Turkey, Israel and Kuwait.The earthquake was the deadliest of 2017, and one of the year‘s strongest.

Although the quake hit both Iran and Iraq, the Iraqi side of the border is much more sparsely populated.Several hundred people were injured in Iraq, and 10 people died.

Note: The post (Iran-Iraq earthquake: Rouhani vows action over collapsed buildings) appeared first on (bbc) and do not necessarily reflect the position of IraqNow.news.
You can read the original text from the source (bbc).