THE CALM BEFORE THE IRAQI STORM: 15TH ANNIVERSARY 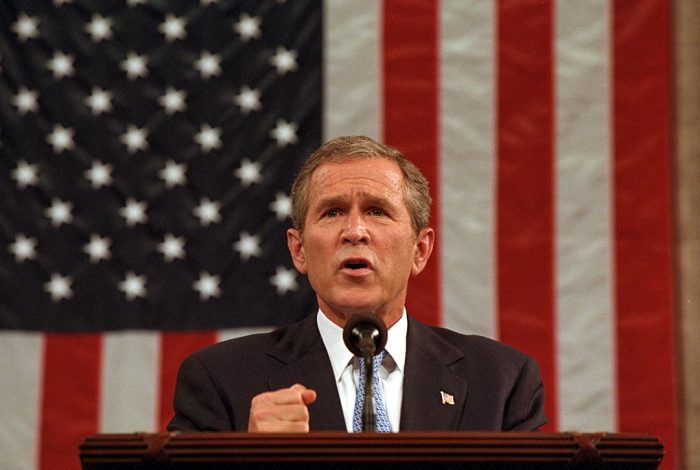 2017/10/11 | 14:17
(Iraq Now News)- President Donald Trump rattled Americans (and people everywhere) with his recent deliberately enigmatic pronouncement that “This could be the calm before the storm.” More so because he issued the statement as he stood surrounded by an imposing wall of senior military officers.

Soon, the media were abuzz with speculation.

Was Trump intimating in not-so-subtle terms that the US was once again on the brink of war? Asked what he meant, Trump, the master of self-created suspense, replied, “You’ll find out.”

As CNN pointed out, the president is treating the situation like a reality show:

The thing is: The stakes of a reality TV show are roughly zero.

The stakes of diplomacy with rogue nations pursuing nuclear weapons are incredibly high.

What’s not clear at the moment is whether Trump understands that difference.

Add to this the growing fear that Trump — with his finger on the doomsday button — may indeed be a “moron,” as he reportedly was characterized by his own Secretary of State, Rex Tillerson, in private.

Bob Corker (R-TN), in a much publicized spat, said that Trump is setting the country “on the path to World War III.”

Fifteen years ago, there was calm before another storm, when another US president, George W.

Bush and his team worked hard to paint Iraqi leader Saddam Hussein as an imminent threat.

However, they knew, or at least had reason to suspect, that he was not.

They had an agenda: get rid of this guy.

The premeditation became public with the May, 2005 leak of the secret so-called Downing Street Memo dated July 23, 2002.

It revealed how British officials had privately determined that “Bush wanted to remove Saddam, through military action, justified by the conjunction of terrorism and WMD.”

Most importantly, and famously, the memo proved that the whole thing had been cooked up, i.e., “the intelligence and facts were being fixed around the policy.”

It described a January 31, 2003 meeting in the Oval Office between Bush and Prime Minister Tony Blair.

The Texan admitted that he was determined to invade Iraq, with or without a UN resolution condemning the country.

He said he would do so even if international arms inspectors failed to find unconventional weapons in Iraq.

The bombing was to begin March 10.

The men agreed that it was “unlikely there would be internecine warfare between the different religious and ethnic groups.” This bungled forecast of public reaction within Iraq was passed along without skepticism by the media.

But a few journalists already knew that “the intelligence and facts were being fixed around the policy.” They warned of just that likelihood, but their words fell on deaf ears.

WhoWhatWhy founder Russ Baker was among the few who did not need to be told.

We see this in a story he wrote one month before war began.

Baker felt disgust with the mainstream media’s acquiescence in the march to unjustified war and its lack of healthy skepticism.

This led him to found the news organization whose site you are now visiting.

It is as relevant as ever.

Note: The post (THE CALM BEFORE THE IRAQI STORM: 15TH ANNIVERSARY) appeared first on (whowhatwhy) and do not necessarily reflect the position of IraqNow.news.
You can read the original text from the source (whowhatwhy).